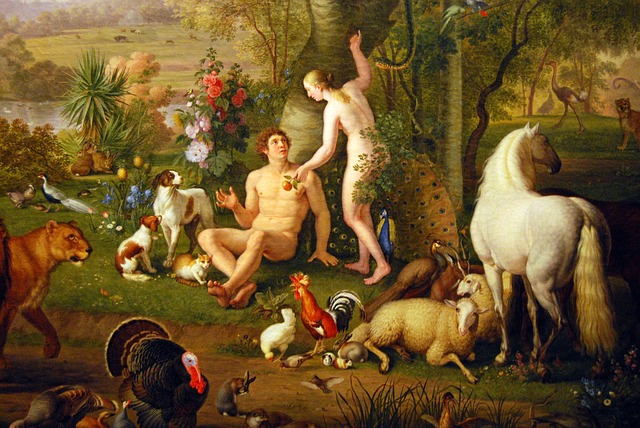 THIS IS THE FOURTH IN A SERIES ON THE CHERUBIM

The king of Tyre in Ezekiel 28:12-19 is called an Edenic cherub. Some dismiss this as an ironic reference to the proud, historical prince of Tyre (Eze 28:1-11). Others see a dark, angelic power holding sway over the earthly prince. We have dismissed the notion that cherubim are angels, but Ezekiel’s cherub is no mere man. He is “the man” or “the adam”, just as Christ is “the son of man”.

The adam’s natural beginnings are detailed in Gen 2:7-20. He was formed of the dust of the ground prior to creation’s third day for there were no green plants upon the earth, no garden of Eden, no Eve. When God planted the garden of Eden, he was placed there, tended it and named the animals. In this state, at this time, he encapsulated both male and female gametes. Not until Eve’s arrival on creation’s sixth day was he created or completed in the image of God, male and female. Just as Levi was said to be in the loins of Abraham, so were all humanity contained within the adam. In this sense, “he sealest up the sum….” (Eze 28:12).

The Hebrew word translated “sum” is toknith. Eze 43:10 marks it’s only other occurrence in the Bible, where it refers to the pattern for a future temple. Sons of Adam are God’s temple (1 Cor 3:16). They are its building blocks. Peter, whose name means stone, calls Christ a living stone. He continues. “Ye also as lively stones, are built up a spiritual house….” (1 Pet 2:5.) The Edenic cherub is the quarry, or the mine from which these stones are drawn.

The Greek word Peter uses for stone is lithos. It applies to both precious and non precious stones as does the Hebrew ‘eben in Eze 28:13. Every precious stone adorned the cherub. The KJV, derived from the Masoretic text, lists these nine stones-sardius,topaz,diamond,beryl,onyx,jasper,sapphire,emerald,carbuncle. The Septuagint, a Greek translation predating Christ, lists three more-ligure,agate, amethyst. These twelve stones adorned the breastpiece of Israel’s high priest, each engraved with the name of a son of Israel, each set in gold. This correlation between the stones and God’s people is obscured in the KJV. In a context of precious stones, gold and workmanship, it inserts “tabrets” and “pipes”. While the Hebrew toph can mean a tambourine, it also refers to the arrangement of jewels. Both the NIV and NAS translate it as “settings”.  Neqeb means cylinder , but it’s not used elsewhere in scripture for a musical pipe. It primarily designates a device for holding precious gems. The NIV uses “mountings”, the NAS, “sockets”. Interestingly, it shares the same root as the Hebrew word for female.

The adamic cherub in Genesis was naked, but this Edenic cherub wears a breastpiece. Is there an inconsistency here? None at all. The high priest, Aaron, could cover himself with tunic, robe, ephod, mitre and sash, as well as the breastpiece, but without linen breeches to cover his loins, he was “naked” (Ex 28:42).

In Eze 28:14, most translations conform to the pattern of the KJV. “Thou art the anointed cherub that covereth”. An accurate rendering is “cherub of expansion who covers”, since the Hebrew word mimshach means “expansion” or “extension”, not “anointed”. Here is a reference to this cherub’s role as progenitor, extending the family of God thru Adamic birth. As to “covers”, the same Hebrew word is used in Psalm 139:13: “…Thou has covered me in my mother’s womb.” It is translated “fenced” in Job 10:11: “Thou has clothed me with skin and flesh and fenced me with bones and sinews.” Adamic birth provides a covering for the human spirit. Birth from above extends that covering to include a place of rest for God’s spirit, our very purpose as cherubim.

Ezekiel 28:12-19 reviews the entire career of the adam, and from the perspective of his descendants, not all the prophecy has been fulfilled. While it is easy to see that the fire brought forth from his midst is Jesus Christ, other questions remain, and will be answered in the Seraphim series. Why was the Adamic race put to death upon the cross, for was not the pattern “…full of wisdom and perfect in beauty” (vs 12)? Why was no shame initially attached to the adam’s loins, but later he sought to cover them? How did the cherubim become merchandise?