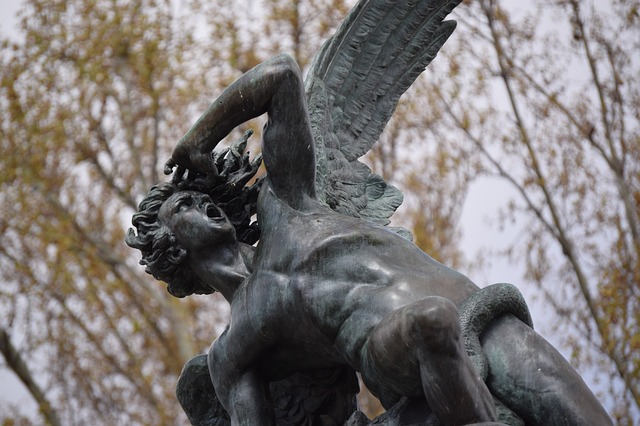 THIS IS THE FIFTH IN A SERIES ON THE SERAPHIM. The fruit of the tree of the knowledge of good and evil looked good, but it was deathly poisonous. Death is not annihilation, but a change of state. The nachashim, the adam and his wife, died to their seraphic state of flesh and bone. By eating from the tree, they partook of flesh and blood, a lowly state, absent heavenly power and splendor. This was the first death; it was immediate and it was physical, not “spiritual” death, though it had spiritual implications. The man and his wife assumed that god-like power accompanied god-like privilege. Only after they had eaten did they learn the downside. Their eyes were opened. Their transformation would scepter them in weakness and shame.

They could not hide from God. He confronted the two sinners-the man and his wife. They had no accomplice. God’s curse on the nachash (the adam) is not an etiological note about snakes. The themes of this narrative are too grand for such a trivial aside. The nachash is humbled to crawl on his belly and eat dust. The dust is his flesh, the substance from which he was made. This suggests the lot of a snake and may explain why “nachash”, the coppery one, came to mean “serpent”. Scripture applies the same figurative language to mankind with great clarity in Micah 7:17a: “They [all the nations] shall lick the dust like a serpent [nachash]”.

God knew the curse would be a temporary setback since the man must also die as flesh and blood. Otherwise, the couple, their offspring, creation itself would be locked in an impoverished state. However, a second death would free the nachash from the curse just pronounced. Once he shed the dust (his flesh), he would occupy an enviable position in the heavenlies. Each succeeding generation of mortal offspring would enhance his power for they would be under his power. He would possess the wealth of the cherubim. God himself testified to this patriarchal claim. He told both Abraham and Moses that they would be gathered to their people. As patriarch, the devil, the adam, even disputed with the archangel Michael over the body of Moses.

God’s work-around was to set enmity between the nachash and the woman. Why was this necessary? Domestic strife should spew from the husband’s betrayal. He engineered their downfall, and then proceed to blame her! The husband’s actions were a bit more serious than leaving the toilet seat up, or not asking for directions. However, God’s reference is cosmic in its implications and extends far into the future to a time when the nachash would reinvent himself as Satan.

The woman learns her fate: “ I will greatly multiply thy sorrow and thy conception; in sorrow thou shalt bring forth children” (Gen 3:16a). The Hebrew text has “sons”, rather than “children” otherwise the KJV provides us with a literal translation. Since the word for “sorrow” also means “pain”, some interpret the passage as a reference to pain in childbirth. However, the Hebrew word translated “conception” in the KJV does not mean “childbirth”. It occurs in two other passages. “So Boaz took Ruth, and she was his wife: and when he went unto her, the LORD gave her conception, and she bare a son” (Ruth 4:13). It’s clear that “conception” not “childbirth” is intended here; otherwise there’s redundancy. The second passage is quite precise. It distinguishes conception from the womb and the womb from birth (Hos 9:11). There’s something very significant in this judgment. For Him to multiply the woman’s sorrow and her conception, she must have experienced both states. Multiplication by zero is zero. Prior to the fall, she must have conceived a son, and just one son, since God uses the singular form, “conception”, rather than “conceptions”. Her sorrow over her own ruin would be exacerbated by what she would bequeath upon her children.

Her judgment also extends to the relationship with her husband: “thy desire shall be to thy husband, and he shall rule over thee.” If “desire” contemplates a sexual need or emotional longing, how does this fit our interpretation of the narrative? She should sooner loathe him. Furthermore, it was her desire for her husband that got her into this fix. The NEB’s version reads: “You will want to control your husband, but he will dominate you.” This rendering reveals the structural flow that exists between the two clauses. It is the better choice. Furthermore, the particular word translated “desire” in the KJV occurs only two other times in scripture. In the Song of Solomon, the woman says: “I am my beloved’s, and his desire is toward me” (7:10). Here the word takes on a sexual tinge, but it also conveys a sense of possession. The other occurrence of the word is found in Genesis 4:7. God’s judgment on Eve and His warning to her son Cain bear a striking similarity (and we shall see why they are closely linked, a little later). Both pair the same words for “desire” and “rule”. There’s no sexual nuance here to cloud the meaning. It’s all about desire, but of a particular kind, a struggle for possession, for control. We could also render God’s words as: “thy desire shall be against thy husband” for the Hebrew word translated “to” can also mean “against ”. This is how it is used in Genesis 4:8 where Cain rose up “against” Abel. Now we see a judgment that is very apropos for one who had idolized her husband. He would defeat and subjugate her.

God then turned to the husband to judge him not as the nachash, but as flesh and blood. The man’s excuse that he ate what his wife had given him, while true, was an admission of guilt. God uses his words to convict him, a nice touch on the man’s duplicity. We also have the first occurrence of the proper name, Adam. Instead of “the red one”, he becomes “Red”. It is his alter ego, and God’s sentence on Adam closely mirrors the curse on the adam. He is bound to the ground to toil in it until death, the second death.