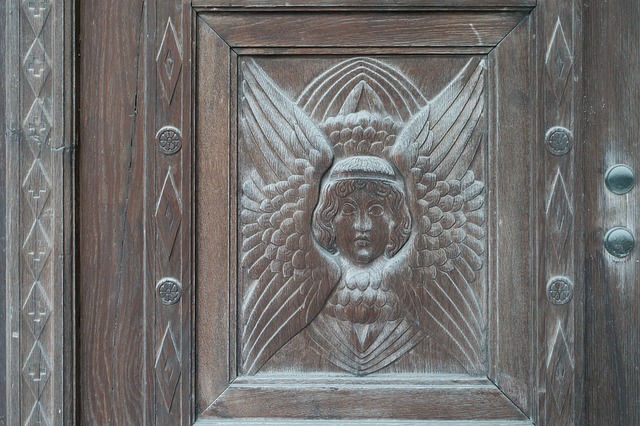 Cain was still a saraph for he had not eaten of the tree of the knowledge of good and evil, nor joined Adam and Eve in exile. He continued the work originally assigned his parents, which was to dress and keep the garden (Gen 2:15). The word for “dress” means to “work,” “serve” or “till”. Cain was a gardener, a tiller of the ground. He tended the “green herbs”, the vines, the fruit and nut trees, and he shared the harvest with his family who dwelt beyond the gate. He also brought an offering to God from “the fruit of the ground”.

The Hebrew word used here for “offering’ later designates the grain offering in the temple worship (called meat offering in the KJV). Here, though, it’s used in its general sense-a tribute gift. There’s no further description of what Cain brought. This suits the imagery that God did not respect (look upon) Cain or his offering (Gen 4:5). However, we can fill in what’s missing with a counterpart found in Malachi: ”I have no pleasure in you, saith the LORD of hosts, neither will I accept an offering at your hand” (Mal 1:10). God goes on to indict his priests for bringing before him that which is “contemptible”. They are irreverent, careless and presumptuous. Their priestly service is an empty, religious observance, “a weariness.”

Abel, a shepherd, also brought an offering, one for which God had regard. Abel gave from the firstlings, the fattest of his flock. “By faith Abel offered unto God a more excellent sacrifice than Cain” (Heb 11:4a), which is not to say that Cain’s offering was in any way excellent. The sense is that Abel’s offering was much better. Jesus speaks of “righteous Abel”, but Cain was righteous in his own eyes; had he not diverted the food to feed his family? Righteous Abel, contrite of heart, offered a sacrifice in faith, looking to God to redeem what his parents had lost. Faithless Cain, bitter of heart, viewed God as the blight upon the past. His parents had been reduced to pitiful creatures, forced from home and made to eke out a living beyond the garden’s gate.

Cain was of the evil one (1 John 3:12) for he listened to his venomous father, adopted his version of events (Your mom gave me the “apple”), and sided with him in the family conflict. God’s acceptance of Abel’s offering alarmed him.  If Abel proved his mother’s promised seed, it would signal yet another upheaval in the family. Cain was its de facto head and by his innate preeminence, his wealth and largresse, he was its keeper. By murdering Abel, he could maintain the status quo. It was easy to vent his anger upon his worm of a brother. They shared no childhood memories of life within the garden, nor did they even share a common humanity.

God took note of Cain’s anger. First, he assured Cain that he was overreacting. If he did right, he, too, would be accepted. Then, God warned him “if thou doest not well, sin lieth at the door. And unto thee shall be his desire, and thou shalt rule over him” (Gen 4:7b). This is a difficult passage. “Sin” can’t be the subject in the Hebrew, since it is feminine, and the verb “lieth” is both prefixed masculine and accompanied by pronominal forms, which are likewise masculine. A normal practice is to insert the missing subject; in this case it would be third person, masculine, singular. We can do this, noting also that the Hebrew tense here can represent continuous, as well as future action: “a man, calamity, is lurking at the gate and his desire is for you, though you rule over him.” The man is Adam, whose expulsion from the garden left him outside its gate.  The word God used for “desire” is the same word used to describe Eve’s longing to control her husband. Jesus applied Adam’s intent to the crowd seeking to kill him: “Ye are of your father the devil, and the lusts of your father ye will do. He was a murderer from the beginning, and abode not in the truth, because there is no truth in him. When he speaketh a lie, he speaketh of his own: for he is a liar, and the father of it” (John 8:44). Both Cain and Abel stood unwittingly in the way of their father’s ambitions, so he schemed to kill them both.

Adam foresaw that he would be in position to reprise his role of nachash, once he shed the bonds of flesh and blood. Abel was possibly a threat (Gen 3:15), one which could be neutralized with a preemptive strike. In death, Abel could not retaliate. (Later, Adam would try the same ploy against Christ with disastrous effects). His purpose in regard to Cain is more opaque. While it may have chafed Adam to be the object of his son’s patronage, payback was a secondary consideration. The father had a far more compelling reason to seek his son’s life. Since Cain was a nachash/saraph and bore the original image of God, Adam had no patriarchal claim on him, no genetic hooks in his flesh, no power to wield against him in the grave. All Adam had was the power of persuasion and a wiliness to manipulate a son’s affection. If Cain killed Abel, and God killed Cain, it would end man’s saraphic line. All future cherubim of patrilineal descent would be born flesh and blood with its impartation of the father’s sin nature. In death, all these would be under his control. His incitement of Cain to murder Abel was diabolically clever.

Adam, a roaring lion (1 Peter 5:8), sought to devour Cain, who was tethered like a goat, held by pride, anger, hurt feelings and the perception that his father, that poor, frail man was just a pussycat. God’s admonition would have set him free, but he was deaf to it, illustrating what Jesus had gone on to tell his attackers: “He that is of God heareth God’s words: ye therefore heareth them naught, because you are not of God” (v 47). Cain’s choice to ignore God’s warning is particularly tragic. Cain did not possess a sin nature inside. He heard his father from the outside. He listened and murdered his brother.

To God’s query, “Where is Abel thy brother”, Cain replied: “I know not. Am I my brother’s keeper”? Here is Socratic irony, an attempt to taunt God with what Cain viewed as an inconsistency: The one who had given him no credit for being his brother’s keeper, now has come to him for an accounting! It was a childish outburst from a petulant, headstrong young man and God refused to be sidetracked from his main purpose, which was to bring Cain to a sense of what he had done.

God’s sentence of exile was appropriate in several regards. First, Cain refused to conform to God’s standard of right behavior. Cain resided in the garden at God’s pleasure, and at God’s displeasure he would depart it. Second, it imposed the death penalty for Abel’s murder by cutting off Cain’s access to the tree of life. A slow death allowed time for Cain to have offspring in the heavenly, seraphic line. Third, exile served the practical purpose of separating the two branches of the family at least for a time.

Confronted with impending mortality, Cain feared he would be killed. Whom did he fear, perhaps now his father? We also know that Adam had other sons and daughters (Gen 5:4) and the restrictive appositive in “Abel thy brother” (Gen 4:9) suggests that Abel had brothers at the time of his death. The narrative singles Abel out for his piety and the pivotal role it played in the enmity between the seed of the nachash and the seed of the woman. Cain feared the enmity. The exile made him vulnerable and expendable to those who might now view him as a dangerous fellow. Deprived of the bounty of the garden, he had no leverage over his family. God’s promise of seven-fold vengeance upon anyone who killed Cain was a measure to ensure the heavenly line continued. It was also an expression of God’s love that’s infuses Cain’s story. God took from Cain everything that he had held dear that he might gain everything he had held cheap.