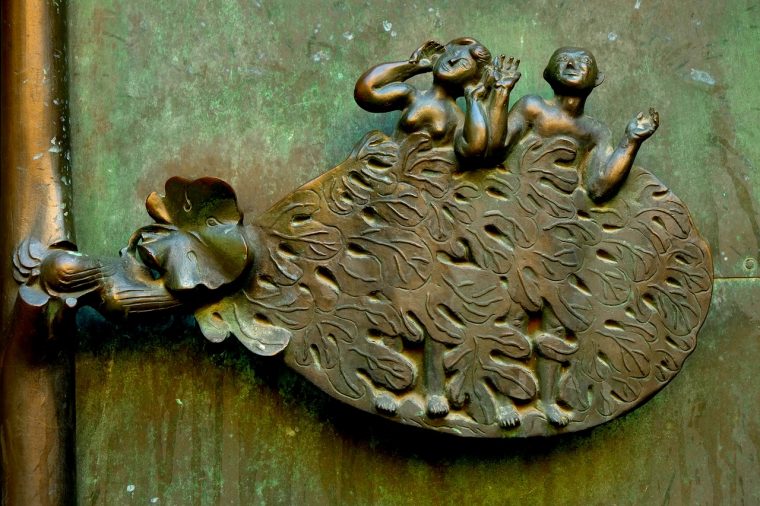 THIS IS THE FIRST OF A SERIES ON THE CHERUBIM

Tradition treats cherubim as an order of angels, but this notion does not square with the Biblical record.   The Bible first mentions them in the expulsion of Adam and Eve from the Garden of Eden (Gen 3:24).  The common view is that  cherubim with flaming sword guard the tree of life  in the midst of the garden.    However,  they are not by the tree  nor in the garden.   Depending on the translation,  they are “placed” or “stationed” east of Eden.   The  Hebrew verb  means “dwell” or “settle”,  hardly what one associates with angels.   East of Eden is where Adam and Eve were sent.  They are the cherubim.  The flaming  sword is the purifying word of God. As Joyce Watson points out in Introduction to Types and Symbols,, it preserves their way back to the tree of life.

This interpretation of the Genesis passage is considerably reinforced in Exodus, where we encounter two cherubim atop the Ark of the Covenant,  and who,  according to Talmudic tradition,  were the figures of youths, one male, the other female.  We need not rely on tradition to see that these were human figures.    The Bible provides a beautiful, glorious proof in the cover of the ark, the mercy seat.

The KJV uses the term “mercy seat”.  In the Septuagint, the Greek version of the Old Testament,  the word for the ark’s cover is “hilasteerion“.   It denotes an expiatory place, thing or sacrifice.  Paul in Rom 3:25 states that God set forth Jesus Christ to be a propitiation (hilasteerion).   He is the mercy seat.

The mercy seat, symbolic of Christ,  is made of gold, symbolic of divinity.  Ex 37:6-9 details the construction of the cover by the craftsman Bezaleel.  He “made the two cherubim of gold, beaten out of one piece made he them, on the two ends of the mercy seat of pure gold; One cherub on the end on this side, and another cherub on the other end on that side:  out of the mercy seat  made he the cherubim on the ends thereof”   The mercy seat and its cherubim are one piece of gold.  Paul declares in 1 Cor 12:27 .  “Now ye are the body of Christ….”  The  view that cherubim are angels has caused us to miss ourselves in them.  Angels do not comprise the body of Christ.  They don’t meet the “gold standard”.

“Brother” is a fitting title and suits the Father’s purpose.  “For whom He did foreknow,  He also did predestine to be conformed to the image of His Son, that He might be the firstborn among many brethren”  (Rom 8:29.)   We,  the  cherubim,  are conformed as beaten gold.   The mercy seat is the visual representation of the spiritual truth Jesus enunciates in Matt 18:20:  “For where two or three are gathered together in my name, there am I in the midst of them.”

One last note on the cherubim passages in Genesis and Exodus.  What of the  wings?  They denote our heavenly position.   According to Eph 2:6,  we sit in heavenly places.   Future posts will deal with other scriptural references to cherubim.   They are not angels or flying saucers.  If one wishes  to view  a cherub ,  pick up a mirror or look at “one another”.