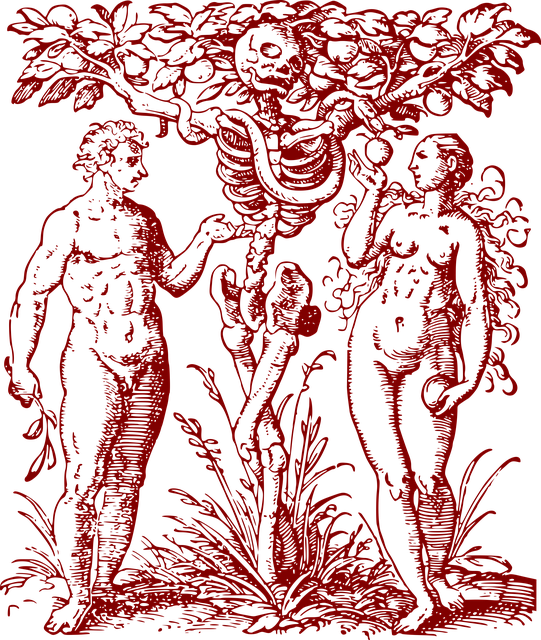 THIS IS IS THE FOURTH IN A SERIES ON THE SERAPHIM. On seeing the woman for the first time, the adam declared: “This is bone of my bone and flesh of my flesh.” Interestingly, Jesus described himself as flesh and bone after his resurrection, but prior to the crucifixion he consistently spoke in terms of flesh and blood. He made an important distinction for flesh and blood cannot inherit the kingdom of God (1 Cor 15:50).

As to “flesh and blood” (or “blood and flesh” in the older manuscripts), the New Testament book of Hebrews has in the KJV: “The children are partakers of flesh and blood….”(Heb 2:14). However, the Greek verb is in the perfect tense, representing a completed action. Robertson’s New Testament Word Pictures translates it “the children have become partners” of flesh and blood. The verse next references Christ’s incarnation: “He also Himself likewise took part of the same [emphasis added]; that through death He might destroy him that had the power of death, that is, the devil”. The virgin birth was the means by which Christ partook of flesh and blood in part but how came the human race to do so? Our progenitors, the first children, ate from the tree of the knowledge of good and evil, and in so doing  became flesh and blood and passed that deathly, corrupted nature onto us.

Now, this partaking was at the instigation of the nachash-the adam. The man was a bachelor when God commanded not to eat of the tree of the knowledge of good and evil: “‘Of every tree of the garden thou mayest freely eat: But of the tree of the knowledge of good and evil, thou shalt not eat of it: for in the day that thou eatest thereof thou shalt surely die’” (Gen 2:16,17). He was alone; “Thou” in the Hebrew is second person singular. This command differs and even appears to conflict with what God later told the couple on creation’s sixth day: “And God said, ‘Behold, I have given you every herb bearing seed, which is upon the face of the earth, and every tree, in the which is a fruit of the tree yielding seed; to you shall be for meat’” (Gen 1:29). There appears to be no exceptions. Notice, though, the stipulation that the fruit contain seed. Fruit should have seed. The tree of the knowledge of good and evil is sterile. Its fruit is death, not life. It is excepted in both versions, the first explicitly, the second implicitly.

It was the responsibility of the husband to tell his wife what he alone had heard, but he deliberately added, “neither shall ye touch it”. Does this hint of a predilection for making rules, or is it just an added warning to stay clear of the tree? Since touching it would not produce death, he changed “ye shall surely die” to “lest ye die”. It also appears he omitted telling his wife the tree’s name for she referred to it later as the tree in the middle of the garden. Again, he may have thought to safeguard her. Its name might prove a snare to her for it suggested autarchy over adult children, a thing God had forbidden the couple (Matt 19:4,5).

Later, the adam sought to eat of the tree to breed offspring under his control, but he needed his wife’s cooperation. They must supply a sterile tree with seed. So, he commenced her recruitment with this query: What had God told her about the trees of the garden? She faithfully recited not God’s words, but those of her husband. One tree was off limits, the tree “in the midst of the garden”. To touch it chanced death. Her answer assured him that she had not privately inquired of God. This was his opening to make a slight alteration in what he had previously told her: God had warned of certain death if they touched the tree. This, he explained was a lie for the tree would make them as gods. To prove his point all he had to do was touch the tree.

This required a close view of it. “And when she saw that the tree was good for food, and that it was pleasant to the eyes, and a tree to be desired to make one wise, she took of the fruit thereof, and did eat, and gave also unto her husband with her; and he did eat” (Gen 3:6). She knew the tree was forbidden, but ate anyway. This, and her readiness to believe what she was told, suggests a detachment from God and a devotion to her husband. Paul speaks of such as her in Romans, that from the beginning they worshipped the creature over the creator. We can acquit her, though, of adding to God’s word. The woman was deceived by the subtlety of her husband, the father of lies as Jesus describes him in John 8:44.